Once more into the fray etc – or, at least, the first time this year into the fray on a drop-bar bike. Not covid, but a somewhat broken back (apparently literally at some point, according to the MRI scan …) and spinal nerve issues etc have been getting in the way. Much physio, some steroid injections and rather more painkillers/anti-inflammatories/muscle relaxants etc later, and things are beginning to get back to normal.

ETA: this is not the same disc issues from the last post – just in case anyone was wondering. Those got sorted out fairly fast and did not cause anything like the same degree of problems – this was a fresh batch in January. Lack of posts last year was due to a global pandemic and generally not doing anything interesting on the bike, not due to back!

I still can’t walk all that far without a cane (but that’s an improvement on crutches) and I did get out on the flat-bar bike a month or so back, but this was the first time out on drop-bars. It has to be this bike as this is the least-aggressively set up of the two options open to me, and I need to be careful on back flexion.

Various things done to try to make this a little safer – I was already running tubeless, but have added Airliners so that, even if a tyre flats completely, I can still ride home/to the nearest train station – the insert reduces the risk of certain types of puncture, and provides enough support etc to be able to still ride. The problem is principally that I’m not entirely sure that I could manage to deal with the tyre/inner tube etc without quite a lot of pain – this effectively adds some security. I’ve also adjusted the stem for height so that my back flexes less, and running the tyres at a little less pressure for comfort/shock absorption. I’m thinking about getting a suspension seatpost as well (the stem already has suspension).

Anyway – this meant I finally got to try out the Routewerks handlebar bag that I got last year from a Kickstarter campaign. It’s brilliant – works as well as I’d hoped. It’s got space for phone, wallet, camera, basic tool kit etc and sits tidily between the handlebars. So far, so normal? The issue I’ve had with handlebar bags in the past has been that either they get in the way of a GPS unit, or the GPS unit gets in the way of the bag (difficult to open zippers etc). In the case of the latter, the bags are also usually somewhat small – certain not large enough for my (not very large) camera. The Routewerks version deals with this by having a solid lid, which contains a mount for a GPS unit (different inserts for different types), and an optional light mount on the side, so that the bag doesn’t get in the way of the light beam. Genius. Works perfectly. It’s not a replacement for the Tailfin, which is perfect for longer rides with more kit, but this will work well with the Tailfin as well. The lid flips neatly for access on the move if necessary as well, although I decided not to try my luck with that today. 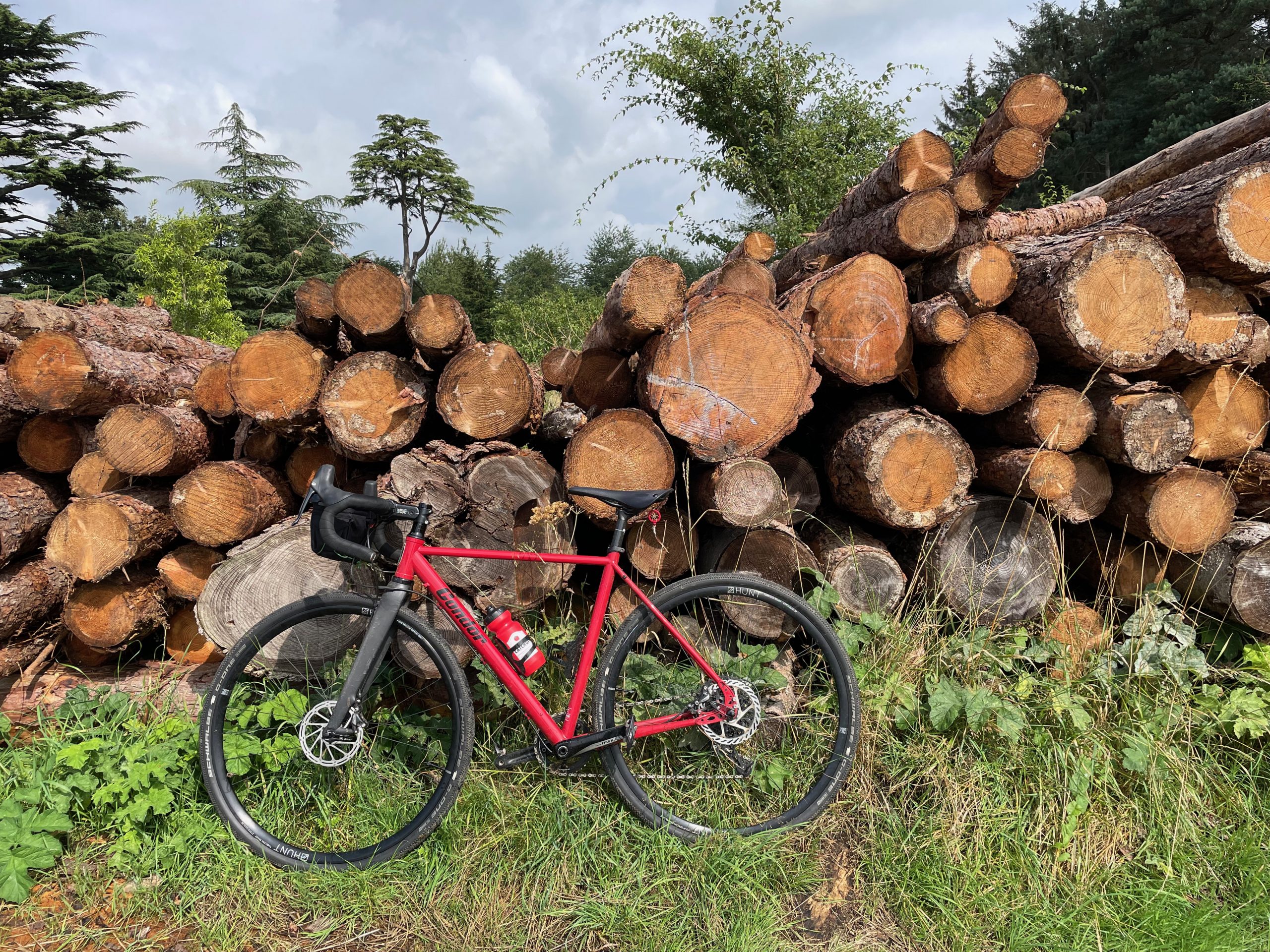 Otherwise, it was a noodle through the local county estate (roads are permissive use, unless the grouse shooting is going on) and finally found a stack of lumber to photograph the bike against – standard gravel bike photo, in other words.

The bike behaved well – I cleaned out the tyres yesterday, expecting to find rather dried up sealant in them, as I haven’t touched this bike in months. Not sure I’ve done anything with the sealant in the tyres for a year or more. The front tyre (Stans sealant) was dry, as expected. Removed the somewhat snot-like gunk and cleaned it all up. The rear tyre had Muc-Off sealant – I think I used something different to the Stans in an effort to resolve the tyre rather stubbornly not sealing properly. It worked. This sealant wasn’t remotely dry, somewhat to my surprise, and the tyre just needed to be rinsed down once the sealant had been removed. The airliner inserts went in easily, and the whole thing seated and sealed fine – was still up to pressure this morning, and I’m fairly used to tubeless needing to be reinflated the day after a sealant change, so that was helpful – will stick with the Muc-Off.

Other things … took ages to find a pair of gloves, and I need to work out where all the others are! I could find the winter gloves but it was not winter today. Not very August-like either, mind you. The wahoo roam had 98% battery life, despite last being charged sometime in December (it’s been switched off, obviously …) – in fact, it’s so long since I last used it that I had to re-pair it to the phone, as I bought this phone after I last used the wahoo … 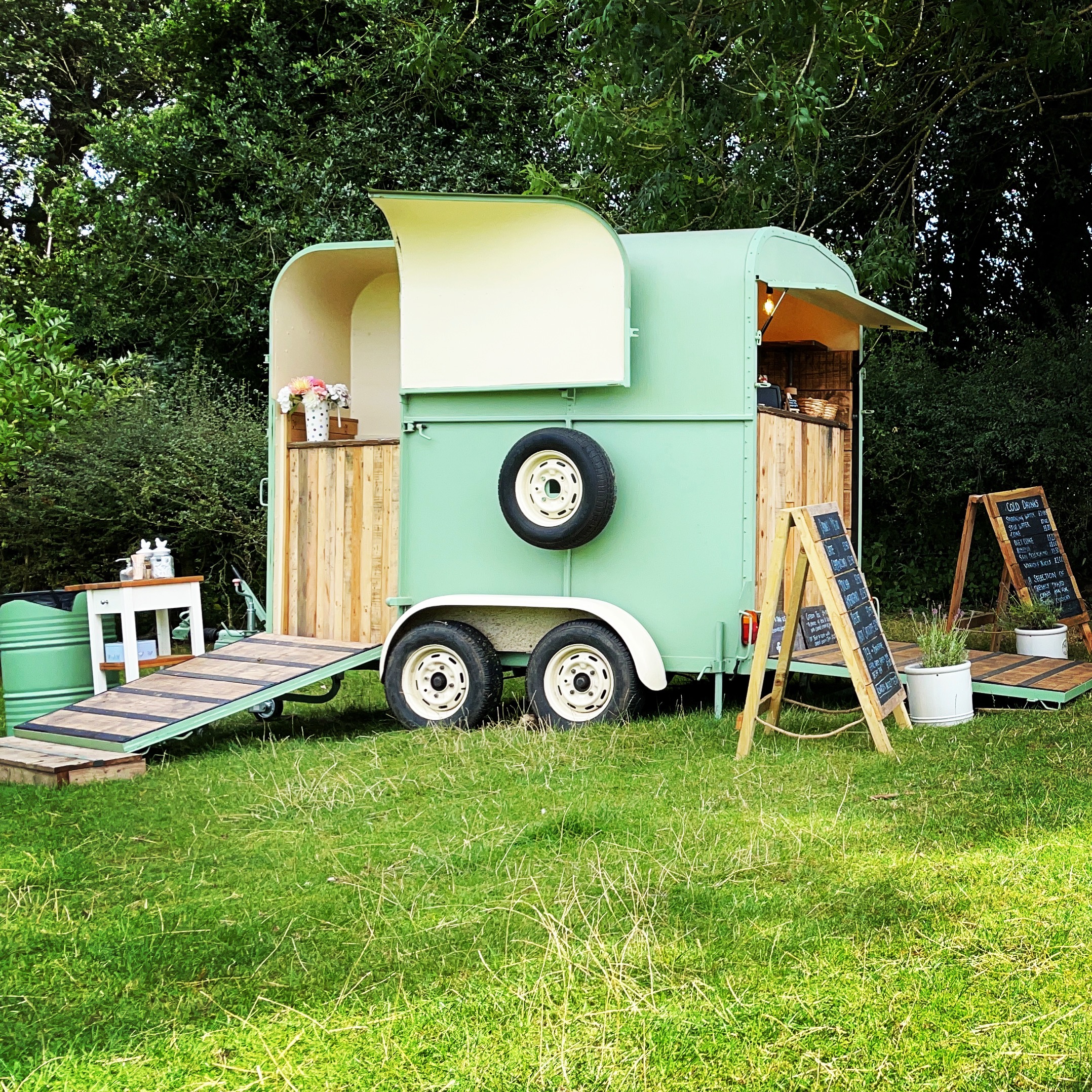 The useful discovery was a new coffee stop on the Gorhambury estate – at Westwick Hall Farm. A converted horse box, which is a neat idea. The coffee is good, and it’s rather pleasant to be able to sit with views across fields etc, away from traffic.

Almost made it up the climb after the coffee stop; I might have been able to push to get up there but decided to take things a little more easily – I’d rather not mess up my back again … there’s time enough to take the rehab slowly. It was a short ride accordingly (13km) and the gravel bike isn’t particularly fast (I’m also not fast, definitely not now).

As usual, nothing’s sponsored – all my own purchases above. Just thought it might be useful information for others.

0 Comments On “Reboot the noodle”