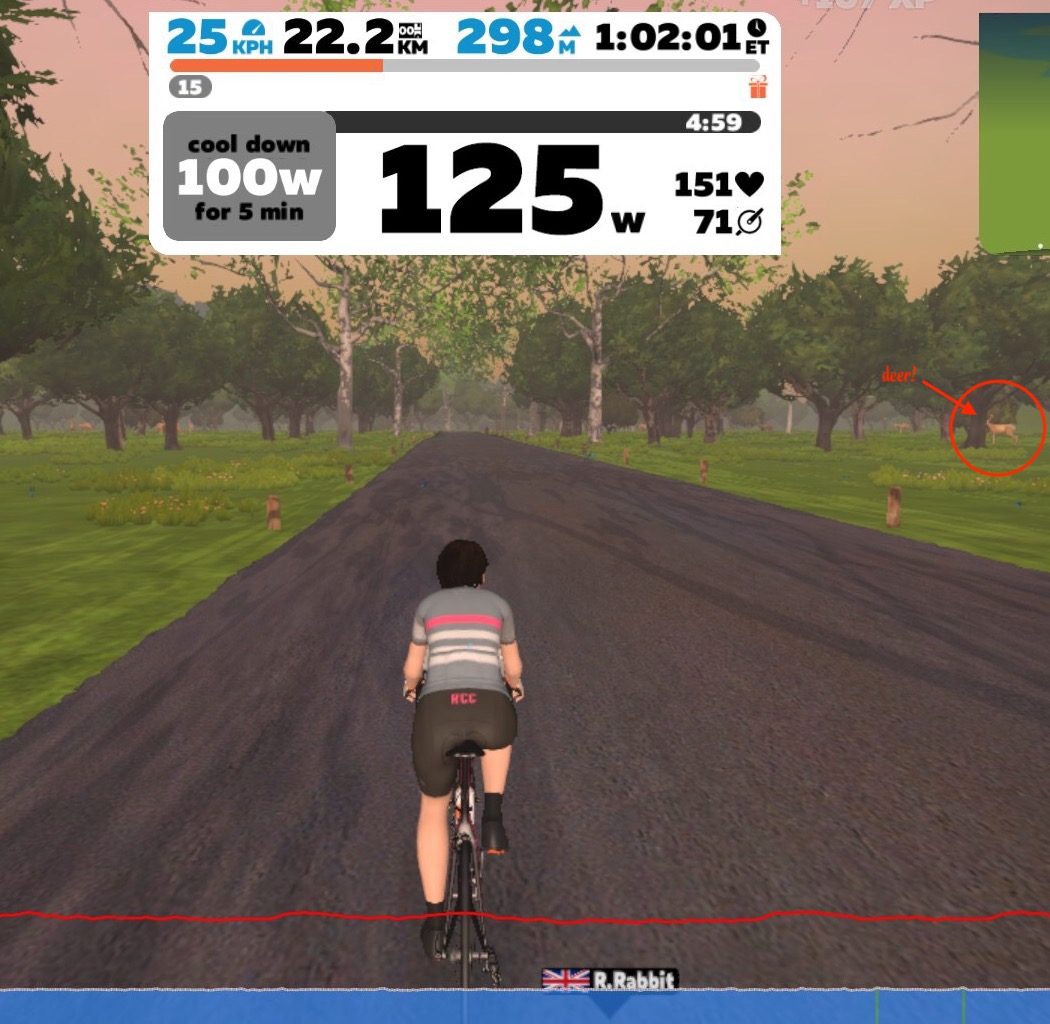 I’m trying some experiments to change my approach to a few things, and one of those got me onto the turbo this morning for a little over an hour, noodling around “London” in a Zwift workout – London and Leith Hill and Richmond Park (deer! and being chased by Roger Rabbit) via the magic spacewarps that exist in Zwift.

It’s the first time I’ve tried out Leith Hill/Richmond Park – I usually stick to the flat bits of London because I’ve been using TrainerRoad workouts in conjunction with Zwift, and I want points … more on that in a minute.

Zwift and TrainerRoad works well as a combination – I prefer the TR workouts/plans, not least because TR acknowledges that not everyone has a couple of hours at a time for a workout, which Zwift’s workouts assume (at least, I can’t find a Zwift plan with weekday rides all under 1.5 hrs or so). TR has low volume training plans for those of us with chaotic diaries, which tend towards a hour twice in the week plus 1.5 hrs at the weekend. That is a decidedly more achievable fit.

The Zwift element comes in by giving me something to look at that is correlated to what I’m actually doing, which seems to make the time go faster. I’ve tried watching tv, films, ice hockey etc in the past, and it never quite worked. I’d lose track of what I was watching in hard intervals, which was annoying, and it’s difficult to concentrate on anything being said whilst working hard (and with the background of the trainer). I prefer music when on the turbo to trying to concentrate on people speaking. Zwift gets past all that (I listen to my own music, not Zwift’s background stuff, however) by having something on the screen that matches what I’m doing.

The combination is achieved by having Zwift running on a computer that’s taking the ANT+ output from trainer/cadence/heart rate monitor and TR running on my phone, using the Bluetooth output from the same things (so, yes, it requires dual-output gadgets. Most of them are dual-output these days – see DC Rainmaker for recommendations/reviews, I’m not about to try and compete with him!). Zwift is set up to just read the power output from the trainer, rather than try to control it, as I just want the visuals. TrainerRoad controls the turbo for the workout.

The reason I ride on the flat sections of Zwift is simple – points. You get points on Zwift for distance, not for elevation gain, so doing a non-Zwift workout up a hill slows you down (at least, in the rest phases) and slows progress through the levels. Yes, it’s all a psychological con but I’ll take my boosts where I can get them. On Zwift workouts it doesn’t matter, because the points there come from completing sections and not from distance – so it doesn’t matter if it’s flat or uphill (well, apart from not increasing my Strava mileage as much, when the ride uploads … yeah, I’m that nitpicky) 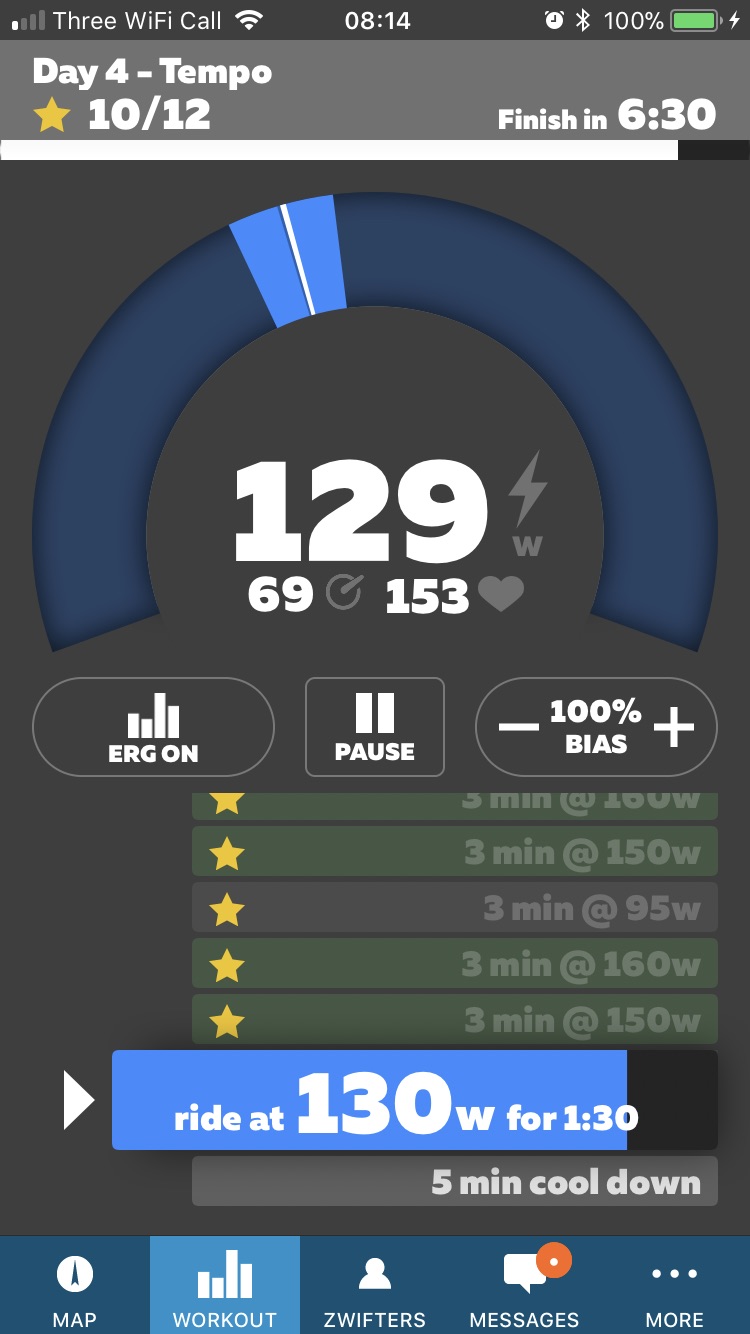 The updated Zwift app plays well with workout mode now – there’s a dedicated workout screen; it’s not so much the information output that’s helpful, as that just duplicates what’s on the computer screen, it’s the fact that you can toggle ERG mode on the trainer, pause the workout, change the FTP bias etc more easily than you can on the computer. It’s basically a remote control for your workout. I also like the visual for power – showing the acceptable output band as well as the output, and the colour changes with the level of your workout.

The rest of the Zwift app stays much the same – the map screen is still there, so you can select directions at junctions as usual, take snapshots, give ride-ons etc; the messages and Zwifters tabs remain much the same too.

0 Comments On “Noodling on Zwift”